The following highlights from the past 20 years illustrate how Keren HaTzadik is “Helping All in Need” as the needs arise:

• After the expulsion from Gush Katif in 2005, Keren HaTzadik came to the aid of innumerable families who lost their homes, and it continues to support many of these families at present.

•Keren HaTzadik’s volunteers were the first to arrive on the scene to help the people of Tzfat, Haifa, Tiberius, Kiryat Shmona, Shlomi and other cities attacked by Hezbollah’s Katyusha rockets during the summer of 2006.

• Keren HaTzadik was the first organization to enter Sederot amid the falling Kassam rockets and to continue to offer material support and encouragement over these past years.

•During operation Pillar of Defense in 2012 Keren HaTzadik’s volunteers, while under fire, supplied food, toys and moral support to the families in bomb shelters. A special relationship was developed with Kibbutz Zikim.

• Keren HaTzadik procures and distributes electric and kerosene heaters to families who certifiably cannot afford them. Many of the people who received heaters from Keren HaTzadik had previously been taken to the hospital with hypothermia due to overexposure to the cold in their own homes.

• Keren HaTzadik through its Lifros Kenafayim program has provided tuition-free professional training to impoverished individuals to enable them to lift themselves out of poverty.

• Keren HaTzadik has educated the public about the importance of Chesed- Helping All in Need, through special events and its Kolel devoted to learning and teaching the Jewish way of Chesed/kindness, giving and gratitude.

​​​What does Keren HaTzadik do with your generous support?

Keren HaTzadik strives to emulate the love and kindness of Rabbi Aryeh Levin, of blessed memory, by “Helping All in Need” across the religious and socio-economic spectrum of Israeli society with food, heat, moral support and much more!
Keren HaTzadik supports people in distress and assists them to get back to work and back on their feet.

As noted above, Keren HaTzadik encourages employment. Knowing that their privacy will be protected, the temporarily unemployed know that they can turn to Keren HaTzadik for support during the stressful period between jobs. The roster of families grows and shrinks as families get back to work and others fall on hard times, but approximately 1000 families, are helped on a regular basis. Among them are many Gush Katif families who are still struggling to rebuild their lives.

The families of Keren HaTzadik, (with very rare exception,) turn to no other organization for assistance. Why? Because Keren HaTzadik is the only organization that can guarantee the highest level of anonymity to the recipients according to Jewish Law and Israeli law. (More details about Keren HaTzadik’s unique legal status in Israel can be found at http://ch7.io/aO2y. 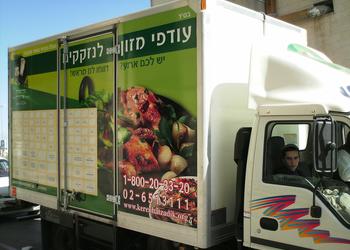 The Mission of Keren HaTzadik is to provide- in the most dignified manner possible- food, heaters, material assistance, moral support and vocational assistance to economically challenged families headed by Scholars and Alumni of IDF-Hesder Yeshivot.

Who receives assistance from Keren HaTzadik?
In addition to responding to the needs of anyone in distress, Keren HaTzadik is known as the organization that helps: